Posted on September 28, 2019 by Chronically Jenni

It’s strange to think, as I sit here in bed in my most comfortable tracksuit with a bloated tummy and sore head, that this time last week I was sat down for a 3-course dinner in a beautiful cathedral, which looked like it had been taken straight out of a Harry Potter film, dressed like a modern-day Ariel who had just learned to walk. I was surrounded by funny, interesting, brilliant people and had just been laughing as Sally Phillips, from Miranda & Bridget Jones’ Diary, made fun of the current mess of our country’s leadership. It definitely wasn’t an ordinary Friday night. I spent last Friday morning traveling to Liverpool for a wonderful and exciting event that evening. I had been nominated for the Positive Role Model for Disability Award at the National Diversity Awards 2019. It was an absolute honour to just be present at such a wonderful occasion. Let alone being there because I had been nominated for an award myself. It was a very special night.

The first surprise of the night came well before we’d even reached the stunning setting of Liverpool’s Anglican Cathedral. After our very long journey’s mum and I got glammed up at our hotel a few miles away. I gave mum a quick lesson in taking the perfect Instagram shots before our Taxi arrived and we headed to the venue. The surprise comes when we get out of the Taxi and he tells us it will only be £3?! I like it up north 😛 Not only this but outside we were greeted by a huge tribe of drummers to welcome us. I was flattered with so many compliments before we’d got to the entrance but I did have a strange conversation with a random stranger who did not appear to be going to the event but merely a passerby. He complimented my hair and then spotted my walking stick and said ‘Is the cane a reference to a film or tv show or something?’ This was a new one. ‘No, it’s just a walking stick’, I replied. ‘Right…Good…Because that would be bad’, said the stranger. Yes, yes it would, I thought as I carried on my way. A few more pictures outside, got to get the good light, and we headed into the cathedral itself. From the outside It wasn’t the most beautiful building, it’s a strange rusty colour which doesn’t fit with the image of a cathedral which I have in my mind but the inside was a completely different story. 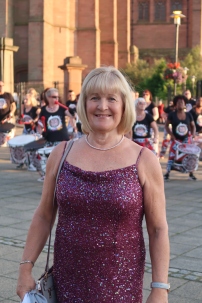 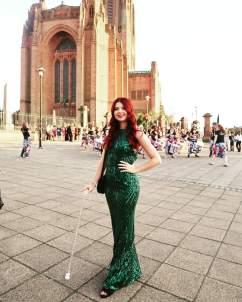 The stained glass windows sparkled under the lights that my lighting designer boyfriend would have geeked out over. Waiters floated around with champagne and canapes whilst film crews and photographers whizzed round. It really did feel like the Oscars. Then we spotted the dining area full of hundreds of candles on tall candelabras atop over 50 round tables in long rows. It really did feel like I was about to attend the yule ball at Hogwarts.

Then I met the first of many superstars of the evening, The lovely Elin from My Blurred World, who was also nominated in my category, yet far more deserving! In 2018 she was named one of the most influential disabled people in the UK for her Disability & Lifestyle blog all about living with a visual impairment. She was diagnosed with degenerative eye condition Retinitis Pigmentosa aged 6 and was registered blind by 12. We had a lovely chat with Elin & her mum before we went to our respective tables for dinner.

Catering for my difficult dietary requirements is tricky so whenever I go to big events with mass catering my expectations are always low. However, I was very pleasantly surprised. We had a very tasty tomato soup with a gluten-free dumpling to start. Now, I’m not going to lie, I still can’t tell you what the vegetarian main was, I’m going with some kind of Polenta slice but the vegetables, fondant potatoes and sauces which accompanied it made the whole plate taste fabulous. They’d gone to great effort with the vegan dessert to make a soy panna cotta with raspberry coulis but desserts generally aren’t my thing, especially milk-based ones even if they are dairy-free, but a gave it a try. 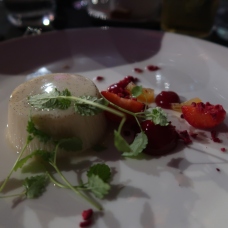 We had some fab people on our table. From SuperTeacher Sarah Mullin, who was nominated for positive role model for gender and has way too many letters after her name, to another nominee from my category, Terry McCorry, a disability hate crime advocate and rheumatoid arthritis sufferer from Northern Ireland. He had brought along his beautiful wife Patricia. We talked twitter and walking sticks and had a lovely time.

Talking of walking sticks, I was so excited to have been gifted a brand new one for the occasion by NeoWalks. Lyndsay, who runs Neowalks, is a beautiful soul. An amputee herself she wanted to make sure people know that walking sticks can be stylish too. I had chosen the champagne fizz stick which is clear and has beautiful bubbles in the acrylic. These catch the light and make the whole stick sparkle. I think this was the first time I’d ever felt proud to use a mobility aid. It complimented my forest green, sequinned mermaid dress, which Mike had bought me last Christmas, so well and with my freshly coloured red hair I did feel like a real-life Ariel for the evening. I felt like a million dollars. As soon as I have some spare cash I know I will have a whole NeoWalks walking stick wardrobe!

Terry & I had a little wander around before the awards segment of the evening got started; the chairs were not ideal for people with hip problems. We were lucky enough to meet Sally Phillips who was so lovely and had time for everyone and asked questions despite being on a tight schedule. We also got to meet National Diversity Awards CEO Paul Sesay who thanked us for our hard work. Finally, we got to meet Dan White, who we had both met separately through Twitter. Dan is a broadcaster, writer and campaigner who had been nominated for these awards in the past but that evening he was there to celebrate the achievements of his amazing daughter Emily, who, at just 12 years old, won the award for positive role model for age. Emily was born with Spina Bifida, among other things, and has been a wheelchair user since she was 3. She wanted to see more people like her represented in TV & Books so, with the help fo her dad created ‘The Department of Ability Comic‘ which features 5 disabled superheroes. She has also appeared on almost all the major TV channels campaigning for better access & care for disabled children. She’s a true rockstar! 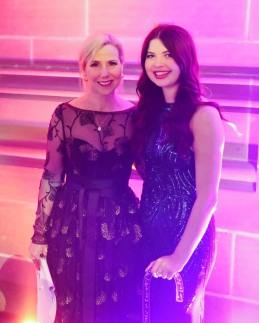 Then it was time for the awards to be given out. A whole host of celebrities and public figures were in attendance to present the awards from the Mayor of Liverpool herself to Reggae Reggae Sauce creator Levi Roots, and one of my all-time favourite Paralympians, Hannah Cockcroft. Presenting my category was the editor of Able Magazine, Tom Jamison and Sports Pundit Chris Kamara who rather surprising got the whole room to join him in a chorus of Let It Be which you can see in my latest vlog. Unfortunately, It was not to be for me this time, but I’d come to that conclusion as soon as the nominees had been announced and I’d seen the caliber of who I was up against. Having been shortlisted from over 28,500 nominees, I felt like a winner just being in that room. Plus, Terry and I had already had the discussion that neither of us could possibly win considering we are disabled and we were seated right at the back 😛 The prize went to the brilliant Myles Sketchley who has Schizencephaly, a rare brain defect that caused cerebral palsy, scoliosis, kyphosis. He is a youth ambassador for Strong Bones and has traveled across Europe making wheelchair accessible guides to various attractions.

Obviously, the whole room was filled with incredible people doing amazing things but one fo the main people that stood out to me was the winner of the entrepreneur of excellence award, Codilia Gapare. She is a breast cancer survivor who the first-ever range of false eyelashes for people undergoing chemotherapy called ‘C Lash‘. It’s such a simple but brilliant idea that I’m sure makes such a huge difference to people with Cancer and Alopecia. Her speech was so eloquent and she just really shone.

After the awards, we were treated to some great entertainment including a fabulous Toy Story inspired number from Jennifer Ellison’s dance company, Jelli Studios. But one of my highlights of the night was the LMA choir who you may have seen on The X Factor. There was a technical glitch at first so they treated us to an impromptu acapella performance of the Circle of Life from The Lion King which, in the acoustics of the cathedral, sounded magical. But my favourite performance of there’s, which they ended up doing as an encore, was This Is Me from The Greatest Showman. I know this song is done to death despite the fact it’s been nearly 2 years since it’s release, but having a whole room of incredible, diverse people who knew exactly what that song meant singing along was a highlight of the evening. 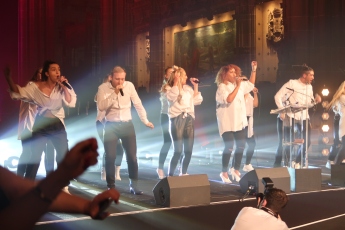 The evening finished with all the nominees getting on stage for a fabulous group photo. We shook hands with CEA Paul Sesay as he tried to convince us to join everyone at the after-party but after a 4 hour + journey that morning and a long evening of festivities I decided not to let the fear of missing out win and Mum and I headed back to our hotel in another £3 taxi despite it being almost 1am. 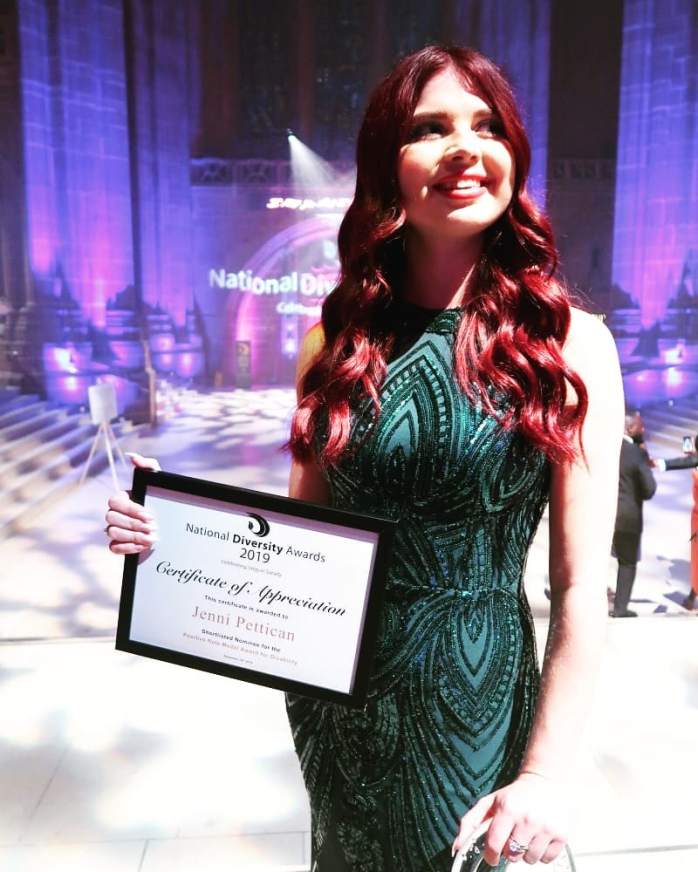 Until I was nominated for one I’d never even heard of the national diversity awards but I think they are a hugely important event which should be much better recognised. Celebrating diverse people and inclusive companies which often don’t get any recognition despite their amazing work. I’m so glad to have many so many amazing people and to have learned about so many more. Thank you so much to the NDAs for having me and huge congratulations to all of the nominees & winners.

To see more about my time at the national diversity awards and weekend in Liverpool head here to watch my vlog.

One Comment on “Friday Thoughts: The National Diversity Awards”

'The way I see it, if you want the rainbow, you gotta put up with the rain' - Dolly Parton 🌈
ad Are you ready boots?! I’m so excited that autumn, and therefore, boot season is finally upon us! Especially with @schuh ‘s fab new autumn/winter collection!
"That's the thing about pain, it demands to be felt" 💙
Escape 💚
If people with Chronic illnesses are faking anything, they are faking being well!
I am officially burnt out, my friends.