Posted on December 10, 2021 by Chronically Jenni 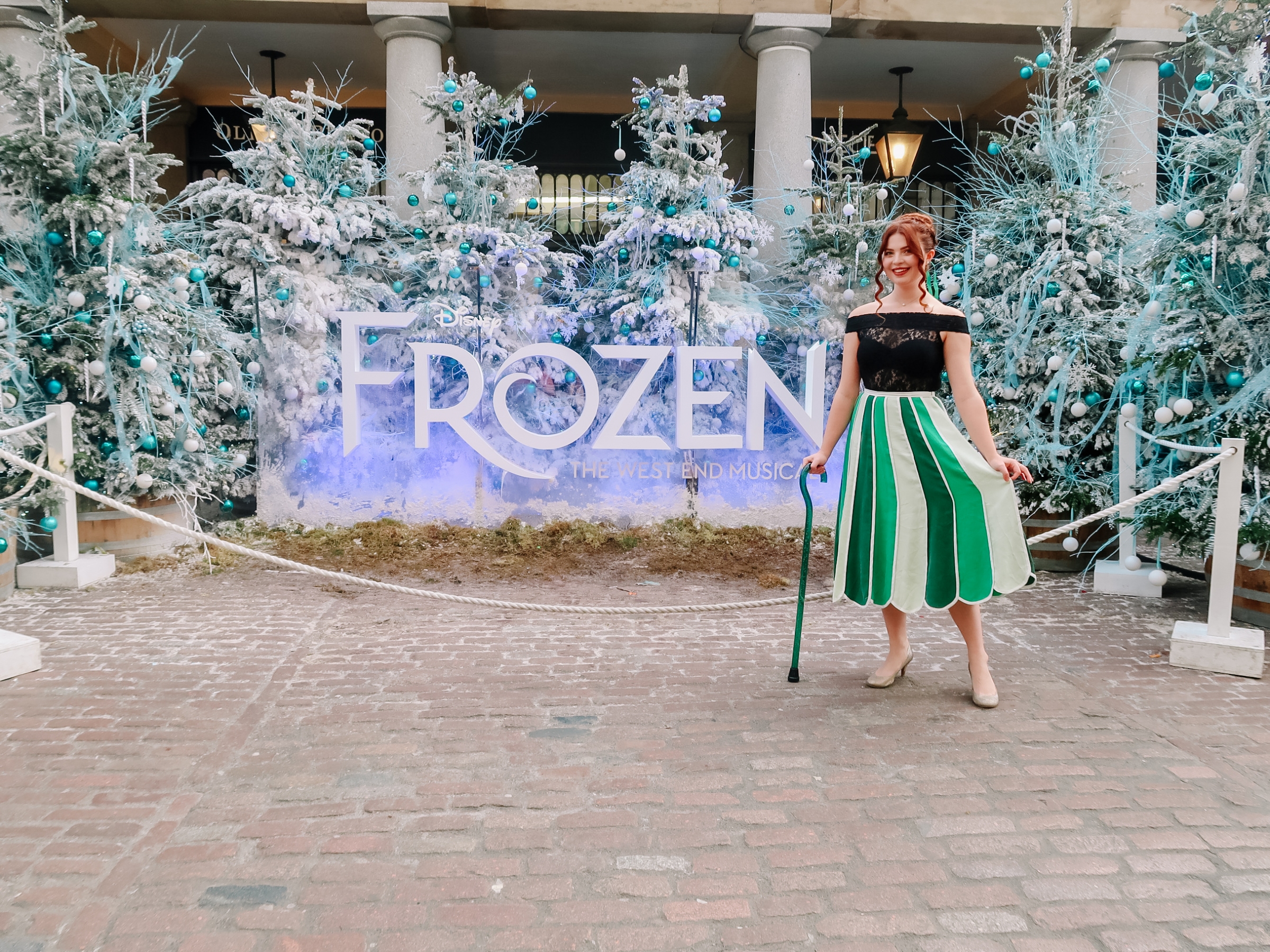 I finally got to see Frozen the musical, almost 2 years after I originally booked it, & it was definitely worth the wait! 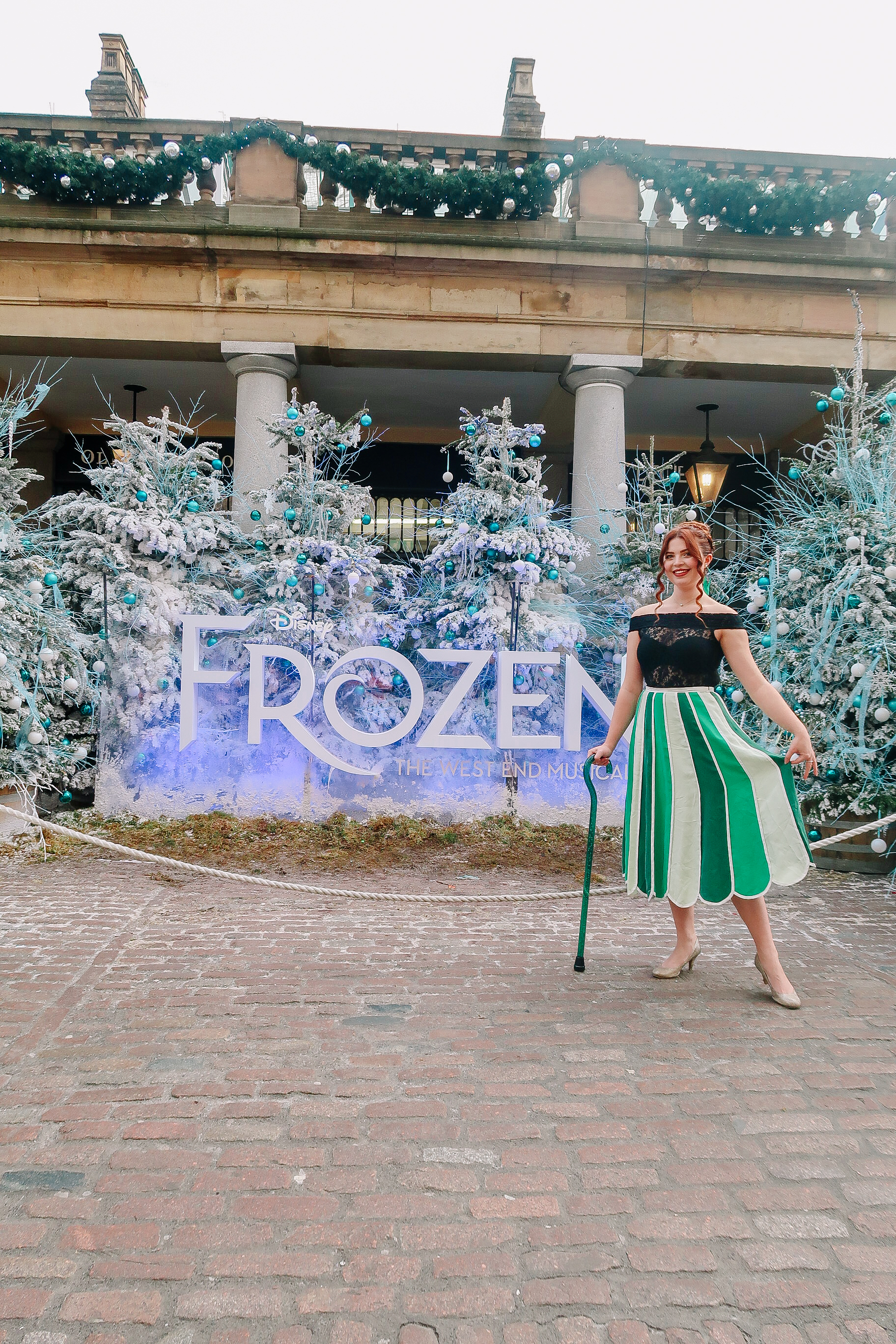 I’ve had at a theatre. There was a clearly labeled accessible entrance where we were met by someone who arranged for us to be shown to our seats. The whole stalls level is completely flat so we could access the toilets, shop & concessions on our own with ease. This was a little dangerous as it meant it was way too easy to treat myself to an Elsa inspired XL child’s hoodie…I regret nothing 😛 The main aisles were also wide enough that I could take my walker/wheelchair all the way to my seat. There is also lift access to all levels although this is something we checked out for ourselves. Their covid measures were also excellent with covid passes required for entry and inside staff had signs enforcing mask wearing and an announcement was also made to make sure people wore masks (which the vast majority of people did) making me feel a whole lot more comfortable than my last theatre trip to Mary Poppins a couple of weeks ago where no of this was in place despite it being advertised that it would be. I got the tickets a long time ago but for access seats you have to fill out a registration form but I don’t think it was a long form and once you’ve registered it works for all LW theatres and you can sort your tickets quickly and easily.

The show was amazing! After Let It Go I sat there for a good minute with my mouth wide open in awe which I don’t think I’ve ever done in the theatre. Simply & literally jaw droppingly good! Despite the millions of times I must have heard that song, the production of it, Samanta Barks’ amazing voice & the famous quick change made it pure magic which was phenomenal to watch. Hygge was definitely my favourite ensemble number & had us laughing out loud the whole way through! I didn’t know what I expected of Sven the reindeer but it was the most incredible & realistic animal I’ve ever seen staged, I’m still not sure how they achieved it but it’s incredible work from the performers Ashley Birchall & Mikayla Jade and Puppet Designer, Michael Curry. Obioma Ugoala had a voice like butter with an incredible range & was the perfect Kristoff with strength, sarcasm & sweetness. The wonderful surprise of the night for me was Oliver Ormson as Hans. Hans was always going to be a tough character because, when you’ve watched Frozen as many times as I have, you are programmed to dislike him from the start but Oliver made the character so genuine and likeable, sweet even, that you could suspend that disbelief and still be shocked when he reveals his evil side, which Oliver also played extremely well. I wanted to wear every single one of the costumes, they were so amazing. In the second half Elsa has a slightly unnecessary but completely fierce costume change into a corset and trousers with fur trimmed boots which I wanted to wear right off Samantha Barks’ back it was so cool! I loved how they stuck to the scandinavian styles & textures for the costumes but it really was the sets, lighting design (Neil Austin), video design (Finn Ross) & special effects (Jeremy Chernick) which really brought the magic to life for me, especially Elsa’s ice palace with crystals falling from the sky like icicles and the Northern light backdrops. Finding out the scenic & costume designer was the same person (Christopher Oram) makes total sense because the whole landscape of the production gelled together so well.

They did change the order of the story from the film which was a little disorientating at first although small details from Frozen 2 were mentioned which I enjoyed. After hearing and loving ‘What do you know about love’ on the soundtrack this was the only number which fell a little flat for me, but this may have just been my high expectations having listened to it. They also switched the For The First Time In Forever (Reprise) for a new song which I don’t remember the name of. It was a very sweet song for the two sisters to sing together but didn’t seem to match the distress Elsa then displays so I feel keeping the more memorable reprise would’ve been better. I also really missed Anna’s song ‘True Love’ from the broadway soundtrack not making it to the west end version, not only because it’s one of my favourites, but because it is an important part of Anna’s journey as a character. Without it we don’t have time to digest the pain & heartbreak which made her conclusions about Kristoff and the end in general feeling a little rushed. The last thing which was difficult was all the kids, it is Frozen so I totally get it, but this isn’t a panto or a singalong, it’s a proper west end show and deserves that level of respect which I don’t think it got from the kids in the audience. I was also surprised at just how many kids were there on a Thursday matinee when they should’ve been in school. The theatre says it doesn’t allow under 4’s but I don’t think that was strictly adhered to. The kids next to us were extremely well behaved but the child behind my friend sang loudly & was kicking & climbing the chairs, the steward did talk to the parents in the interval after we mentioned it but unfortunately it didn’t help much which was a real shame. There was a lot of singing along to the well known songs and noise from kids throughout especially during the spoken scenes where they had lost focus. This even had me distracted despite being extremely used to working in a similar environment so do be prepared. Big props to the cast for managing to perform every night with that level of distraction because it’s tough!

Overall a really wonderful production which was definitely worth the wait and I can’t wait to hopefully see again in the not too distant future. Until January they also have the frozen light tunnel and frozen christmas trees in and around Covent garden so do check them out and have a little instagram photoshoot fun before or after the show!

I’d love to hear about your favourite musical in the comments and your thoughts on Frozen if you’ve seen it. I’d also love to know if you’d like to see more theatre reviews from me in future including info on Covid Safety, Accessiblity as well as about the production itself.

Disabled people are strong, but we are tired.
When you have a chronic illness, resting is hard!
And the winner is... The Purple Suit 💜
EXCITING ANNOUNCEMENT!! 💜✨
It’s normal and valid to use #DifferentAidsForDifferentDays just like it’s normal to use different tools for different jobs.
Help me pick an outfit for a winter wedding reception!!