I love making up my own recipes and/or making meals up as I go along but I also love learning recipes from various bloggers and writers. However, especially when making a recipe from a book I get frustrated when, after putting in a lot of effort, things don’t go quite right, especially when it comes to the time it is meant to take, the ingredients it needs or the amount of servings you get. So I wanted to start reviewing other people’s recipes so you can read a real life experience and see the real life image and decide if the recipe you think looks good is really for you. I’ll also give you some interesting little tips, tricks and information such as cost per serving, additions and alternatives to make recipe’s work for you.

So today I have made and am reviewing…

Now Fearne Cotton is one of my all time idols! I’ve

loved her since I was a little kid watching her on tv and when I got to meet her, and be on radio 1 with her, last year at Norwich’s Radio 1 academy before Big Weekend it was one of the best days of my life. Although Fearne is best known for her work on tv and radio she is incredibly talented and has turned her talents to many other ventures including art, fashion and beauty (her nail varnishes are THE BEST, and I told her so). Now she has turned her talents to cooking and, in eager anticipation, I waited, watching pictures of her food pop up looking sensational on instagram and seeing how much her famous pals such as Tom & Giovanna Fletcher and Denise Van Outen were enjoying her food so I just had to pre-order her cookbook ‘Cook Happy, Cook Healthy’ and was very excited. After seeing her instagram posts, and knowing she had also been a Veggie for a long time, I was looking forward to some good veggie, gluten free and sugar free recipes, however, the recipe’s are not quite as gluten free as I had hoped. In general, the book also has quite a few meat and fish recipes which don’t have an obvious veggie alternative with

them, which I wasn’t expecting. I do cook meat for my family but as an addition to a vegetarian or vegan dish, not the other way around. Anyway, before seeing what her recipes would be like with gluten free, rather than just wheat free( she uses a lot of spelt flour in her recipes), alternatives, I picked something that didn’t need the alternative. I also didn’t have any coconut sugar (I’ve now got some on the way; thank goodness from amazon prime) so there was only really 1 sweet recipe left for me to try: Mini coconut cherry tarts. Although I don’t have any cherries but, as these are just for a topping, I decided to make them anyway and below you will find the result of my attempts. This recipe is also the back cover shot for the book, so it should be good right?… 🙂 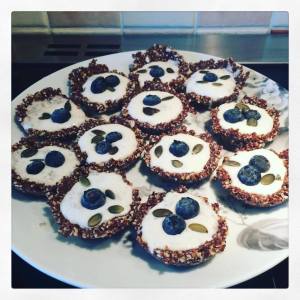 Pretty much everything on the ingredients list is readily available in your local supermarket although you may have to look in bigger stores for good quality coconut milk and maple syrup which isn’t full of other ingredients i.e added sugar. You may also want to shop around for your almonds and dates as they can be really expensive I got mine on BOGOF and 3 for 2 respectably and its a good idea to stock up whilst they’re on offer. I also buy my maple syrup, coconut oil and cacao powder and although you can get these in supermarkets they are much cheaper online.

These are pretty great as this recipe is already gluten and sugar free and can be made vegan very easily by simply switching the honey for maple syrup. The one big allergen in this is nuts in this case almonds. If you are just allergic to almonds then they could be easily swap for cashews or pecans etc but if you can’t touch nuts then sadly these aren’t for you.

If you simply don’t like cherries or pistachios , or, like me, just don’t have them in the house, they are basically just toppings so can swap them for whatever fruit and nuts or seeds you want. I used blueberries and pumpkin seeds which worked really nicely. I also used half of a proper vanilla pod instead of vanilla extract just as personal preference.

Also the bases for these tarts could be filled up with literally anything. I think they would work really nicely with any nut or seed butter (there are recipe’s for these in Cook Happy, Cook Healthy too) or even with a chia seed jam.

There was also a lot of base mix left so I decide to throw some on a baking tray in biscuit shape and bake for 12 mins (I did 15mins that’s why they’re a little burnt) and they turned out pretty nice too if you didn’t want to mess about with a filling at all.

For the most part, this recipe is fairly straight forward, It’s basically roast nuts, blitz base ingredients, freeze bases, blitz toppings then add the two together. However, it is written in a strange order which would take even longer than it did as it basically said to let the bases freeze then make the filling whereas its much easier and quicker to make the filling whilst the bases are in the freezer.

If you don’t like washing up this recipe probably isn’t for you. Not because there is a great deal of washing up more because you have to wash your food processor up in-between making the base and filling. And to me that’s way more effort than necessary.

A positive about this recipe is that in the book it reckons it only makes 6 tarts but I managed to make 12 plus made 3 biscuits with it too so you definitely get more for your money than first thought making it only 56p rather that over £1.00 each. and you definitely only need one can of coconut milk rather than 2 too!

The downsides to the recipe, however, for the base, if you use the suggested ingredients it is way too crumbly and not sticky enough to make into tarts at all so I added an extra 4 more tablespoons on coconut oil and 1 tablespoon of maple syrup so they’d stick together, which is a crazy amount! (First picture when it was too crumbly the added oil and syrup for second picture much firmer and pliable). Really, I think, this recipe needs a lot more dates in it to form the base properly as similar recipes from Deliciously Ella and Livia’s Kitchen contain over double the amount of dates Fearne uses to make sure everything sticks together. I also found that even just using the coconut cream it really wasnt thick enough so i added a tablespoon of chia seeds just to thicken it up a little. 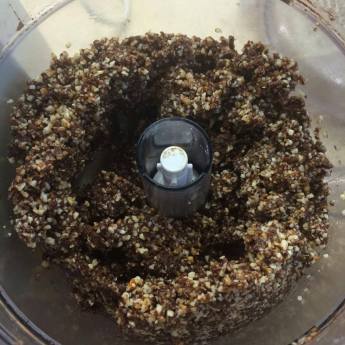 Also, I don’t know what kind of muffin tins Fearne Cotton used but mine look absolutely nothing like the picture as in the book they have really solid sides so the filling doesn’t fall out but mine are a lot more like Reese’s peanut butter cups in shape than the ones in the book which look more like shot glasses. 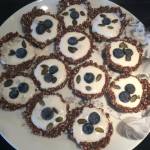 I was a little worried as I am not normally a fan of creamy things or coconut but these surprised me. For me the filling is a little too sweet but that’s probably just because I don’t normally have that much maple syrup in things from someone starting the transition to sugar free they would be perfect. First you get hit with a sweet and surprisingly refreshing hint of coconut then the base is really soft, nutty and chocolatey then the fruit adds another burst of freshness so they aren’t too heavy but just enough not to want to eat more than one. They are not my favourite thing but definitely tasty.

I dislike these because: by following the recipe it wouldn’t have stuck together well enough at all, I want to know how they make them look so tall and rounded in the book as I’ve never seen a muffin tin that deep, They are pretty time-consuming for not that much of a reward.

Overall, I would make them again, but more for an occasional summer party, than an everyday treat.

Thank you for reading. I hope you find this useful. I’d love you to let me know if you’ve found it useful and want me to write more reviews like this or if there’s anything specific you’d like me to try making and review whether its your own recipe or one you’ve found 🙂

'The way I see it, if you want the rainbow, you gotta put up with the rain' - Dolly Parton 🌈
ad Are you ready boots?! I’m so excited that autumn, and therefore, boot season is finally upon us! Especially with @schuh ‘s fab new autumn/winter collection!
"That's the thing about pain, it demands to be felt" 💙
Escape 💚
If people with Chronic illnesses are faking anything, they are faking being well!
I am officially burnt out, my friends.